So, you like a bit of history? Then go immediately to Lumley Chapel, which is considered to be the oldest building in the borough of Sutton. It's thought to date from 1018 when the Archbishop of Canterbury founded the manor of Cheam. In the 1580s, John Lord Lumley converted the building into a memorial chapel for himself and his two wives. Lumley was a leading Elizabethan connoisseur with a famed collection of books and paintings. He was also an ancient ancestor of Ab Fab's Joanna Lumley. 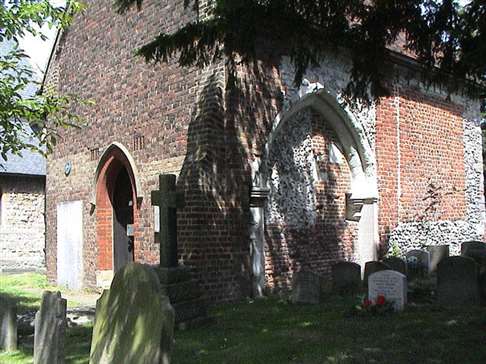 Pictured above: Lumley Chapel in summer 2008

Did you know? Lumley Chapel is maintained by The Churches Conservation Trust, with money provided by Parliament and the Church of England. It is located in St Dunstan's churchyard and used to form part of a much bigger medieval church (that was torn down and replaced by the gothic creation that stands on the site today).

A plaque on the wall of the chapel reads:
LUMLEY CHAPEL
IN THE CURCHYARD OF THE NEARBY CHURCH OF
ST. DUNSTANS CHEAM
STANDS AN
ANCIENT SAXON CHAPEL
WITH FINE CEILING AND ALABASTER TOMBS.
TIMES OF OPENING ARE SHEWN AT
THE LYCHGATE OF THE CHURCH