This 19th century pub is known locally for its roast Sunday lunch. It's a favourite haunt for those who appreciate real ale  there's always a guest beer on offer. The frontage of the pub has recently been spruced up, with a new 'Prince of Wales' sign in keeping with the old one. Its worth nipping round just to see the beautiful flower baskets, and while you're there why not pop in for a pint or a bite to eat. 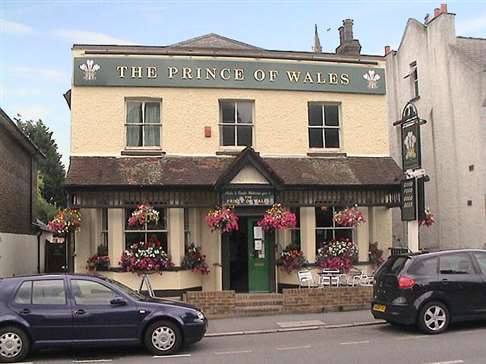 So what have The Prince of Wales and Cheam got in common? Well, the Prince has been associated with Cheam since 1957, when he was enrolled at Cheam School, an upper-class preparatory school that his father had attended. When the Duke of Edinburgh was there, Cheam School was in Cheam, as you might expect. By the time the Prince enrolled, it had moved to Berkshire. In July 1958, during Charles's stay at Cheam School, the Queen named him Prince of Wales. Apparently Prince Charles was treated much like the other boys, sharing a room with nine others, doing chores and eating off solid gold cutlery (oh alright, we made the last one up).

Above left: the Prince of Wales sign, featuring the legend Ich Dien ("I serve" in German), which seems as appropriate for a pub as it is for a prince. Above right: the pub before the makeover of the facade in Winter 2008 with St Dunstan's iconic spire in the background